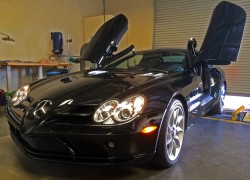 Yet another gorgeous vehicle from the Griffith Racing Team. This black beauty is probably one of the most expensive cars that we’ve ever tested.

From Wikipedia: The Mercedes-Benz SLR McLaren was inspired by the Mercedes-Benz 300 SLR Uhlenhaut Coupe & Racecar of 1955,[2] which was a modified Mercedes-Benz W196 F1 race car. It was introduced on 17 November 2003. On 4 April 2008, Mercedes announced that they would cease production of the SLR. The last of the coupes rolled off the production line at the end of 2009 and the roadster version was discontinued in early 2010.