Engine mounts (Also known as motor mounts) are designed to isolate engine vibration from the rest of the car. Most engine mounts are solid rubber blocks; however, the engine mounts in some cars are hydraulic (liquid filled).

When to replace engine mounts 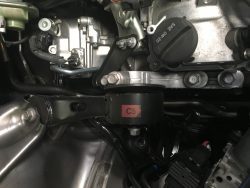 Several years ago, prior to inspecting a longtime customer’s car, I noticed that a hose at the top of the car’s engine was disconnected. Since I hadn’t started the smog inspection, I did the customer a favor and reconnected the hose.

I closed the hood and performed the dynamometer (dyno) portion of the smog inspection. At the conclusion of the dyno test, I got out, opened the hood, and saw that the same hose was once again disconnected.

The vehicle had broken engine mounts that allowed enough movement that the hose going to the EVAP canister was disconnected every time the engine moved!

Most manufacturers do not publish suggested replacement intervals, engine mounts should be inspected regularly.  Under harsh driving conditions they can fail in as little as a year, but most often begin showing signs of wear that include cracking and dry rot after five years.

How can I tell if my engine mounts are bad? 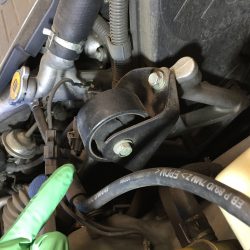 While a little bit of cracking is normal, stretched and broken engine mounts should be replaced as soon as possible. As your engine mounts begin to degenerate or stretch, you may notice excessive vibration especially while your vehicle is idling.

During certain driving conditions worn and damaged engine mounts will allow the engine to shift and move in the engine to such an extent that it can actually “bang” against body components such as the hood or firewall and in extreme cases the engine can actually shift out of position or even drop. You may even notice that some of your hoses wont stay connected