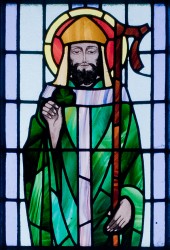 Saint Patrick’s Day is one of the largest celebrations around the world, with Irish and non-Irish alike celebrating all things Irish on March 17.

Saint Patrick (Latin: Patricius; Irish: Pádraig) was a fifth century Romano-British missionary and Bishop in Ireland. Known as the “Apostle of Ireland”, Saint Patrick is the primary patron saint of Ireland.

Saint Patrick is believed to have been captured by pirates at around the age of fifteen.  He was sold into slavery and tended sheep in Ireland for approximately six years until he escaped and gained passage back to England. He eventually became a cleric before returning to Ireland as a Christian missionary.

The Just Smogs® team would like to take this opportunity to wish all our friends and customers a happy and safe Saint Patrick’s day, and as our Irish friends say, May the best day of your past be the worst day of your future.