What Does The EVAP System Do? 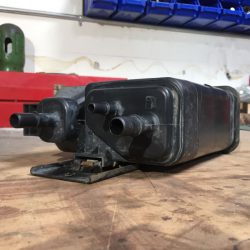 The evaporative emissions control system (EVAP) on your vehicle is designed to prevent fuel vapors  from escaping into the atmosphere from your gasoline tank.

Fuel vapors are composed of hydrocarbon molecules (HC) which when exposed to sunlight and oxides of nitrogen (NOx) result in photo-chemical smog. Photo chemical smog is that brown hazy stuff that nobody wants to see in the sky.

These compounds are also known to cause eye irritations and respiratory problems. That’s why hydrocarbon control and reduction is a major component of your car’s emissions control strategy.

How Does The EVAP System Work?

As stored fuel in you 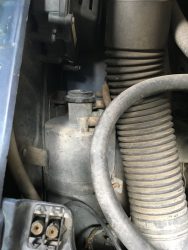 r gas tank evaporates fuel vapors are collected and stored in a canister filled with activated charcoal (the EVAP canister).

When your engine is running and warmed up, engine vacuum siphons stored fuel vapors from the EVAP canister and into the intake manifold. These fuel vapors are added to the engine’s air fuel mixture and are burned off as part of the normal combustion process.

EVAP And The Check Engine Light

When many people see a “Check Engine Light” (Proper name: Malfunction Indicator Light ; a.k.a MIL) they immediately think, “Check the gas cap”. That’s because a missing, loose, or damaged gas cap often is the cause of an illuminated MIL due to a failed EVAP leak test. 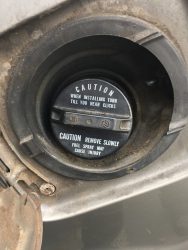 Under specific conditions, often while your vehicle is parked overnight, your vehicle’s on board diagnostic system (OBDII) will perform a series of EVAP system tests.

During EVAP testing, a loose or missing gas cap will be detected as a leak, a diagnostic trouble code will be stored, and the MIL will illuminate.

A loose gas cap might result in a P0442 code, (Small leak detected), and a missing cap could return a P0455 (Large leak detected).

Loose and missing gas caps are not the only cause of EVAP system leaks, but they are the number one suspect.

The information presented below is an example of  diagnostic strategies that a technician might employ while diagnosing your vehicle’s EVAP system.  It is not intended to be exhaustive, complete, or even applicable to all situations. Always follow a vehicle manufacturer’s procedures when performing tests or repairs of any kind. 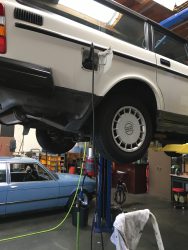 EVAP related diagnostic trouble codes that turn on your check engine light can be set for a variety of reasons. Some faults are caused by leaks while others can result from blocked lines, faulty sensors, or malfunctioning solenoids.

Some vehicles have had issues with spiders laying eggs in EVAP vent lines while others have problems as simple as corrosion preventing a good seal between the fuel cap and fuel filler neck.  There’s more to look out for than bad gas caps.

That’s why its important for you to have your vehicle diagnosed at a shop that employs technicians with the skills, training, and equipment necessary to correctly diagnose and repair your vehicle without wasting your time and money on unnecessary repairs and hopeful guesses.

Before reaching for high tech solutions, a technician should review the basics.

You should be asked questions about your vehicle.

“Have you had any work done on the car?”.

“Oh yeah, me and my brother had to drop the gas tank and replace the fuel pump. We had a lot of trouble with one of the seals. It got a little chewed up, but my brother said it would be fine”.

A little information goes a long way towards finding the solution to a problem. 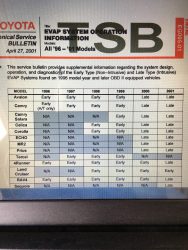 etins (TSBs).  Are there any known issues with the vehicle that could explain the presence of the diagnostic trouble code.

There was an issue with my wife’s 2005 Toyota Corolla that caused several false EVAP diagnostic codes to set.

Before doing anything else, I checked for recalls and technical service bulletins. It didn’t take me long to find out that Toyota had issued a recall, and her Corolla was one of the affected vehicles.

An ECM manufacturing flaw was causing false EVAP codes to set.  A few minutes of research saved me from a few weeks of pulling my hair out trying to find the problem.

When I asked my wife, she said that she received the recall letter, but didn’t think that it was important because the “car drove fine”.

Knowledge About The System Being Diagnosed

EVAP control strategies vary from manufacturer, model, and model year. Understanding a system and how it works is the essential first step towards identifying a problem with a system when it doesn’t work according to design.

A technician will look for loose, missing, or damaged components.

We will often wiggle wires and hoses while looking, listening, and even sniffing for changes.

We’ll remove the gas cap and look for damage to the gas cap, o-ring, and filler neck. While reinstalling the gas cap we’ll pay close attention to how it fits.  Sometimes an incorrect gas cap will look right, but it will not fit right. We’ll listen for clicks.  Does it sound like the cap “locked”?

We’ll use our sense of smell.  The presence of a strong fuel odor, especially during low pressure fuel EVAP testing, is often the first indication that the EVAP system has been compromised

We’ll look again. Is there a puddle of gasoline under the vehicle?  Clearly the EVAP system will not seal if there is a large hole in the gas tank. 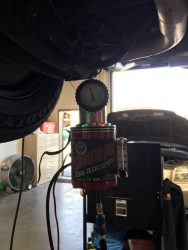 Smoke testing is a common and effective way to pinpoint the location of leaks in a vehicle’s evaporative emissions control system.

While smoke testing for leaks, the EVAP system should be sealed. The purge valve is normally closed, but a technician will usually need to command the EVAP system’s vent valve closed using a scan tool.

I like to start by test the EVAP system with all components in place.  If possible, I’ll introduce smoke through the EVAP system’s test port. The EVAP test port is schrader valve often located in the engine compartment of a vehicle and easily recognized by a green cap.

I’ll then look for smoke leaking from valves, EVAP lines, around the fuel cap, the fuel filler neck, and around the gas tank.

If I see smoke I’ve found a leak (Not necessarily all leaks). Once the leak has been repaired, I’ll repeat the test and ensure that there are no other leaks.

If no smoke is seen on the initial test, I’ll introduce smoke from the fuel filler neck.  I’ll then look leaks at, or near, the fuel the test port that may have missed when with the smoke tester was attached.

If I still do not see smoke, I’ll reconnect the smoke machine to the EVAP test port and start testing the valves themselves for leaks. For example, I might disconnect the hose on the canister side of the purge valve. Since the purge valve is normally closed, any smoke exiting the purge valve at this stage would be a pretty good indication of a leak.

The same is true for smoke exiting a vent valve that has been commanded closed. The valve might be leaking, or there could be a problem on the command side of the circuit (Perhaps a bad ground is preventing activation of the valve), or the valve may have failed electrically. By testing the circuit and the component I can quickly identify the point of failure.

Look, I’ve tested this car every possible way, and there is no leak! 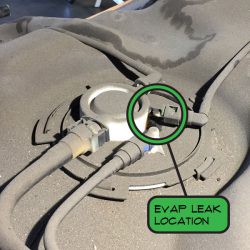 We often remind our customers that diagnostic trouble codes are only a starting point, not the final diagnosis. Sometimes we have to be reminded of that fact ourselves.

A diagnostic trouble code indicating an EVAP leak is only as reliable as the system that triggered it.

For example: A faulty fuel tank pressure sensor might  cause the on-board diagnostic system to falsely indicate a leak.

Any shop performing EVAP diagnostics and repairs should have a scan tool (Preferably bi-directional), and at least one of the following:

The next step is to safely change the pressure in the fuel tank. After noting the Fuel Tank Pressure Sensor value, I connect my smoke machine, or my LPFET,  to the fuel filler neck. make sure you have a good seal. (Again, be sure to observe all manufacturer warnings and procedures. Refer to your equipment manufacturer’s documentation to determine the amount of pressure your tool will add to the tank.)

This is just one example how direct observation and an understanding of how a vehicle’s EVAP system works can help diagnose a sensor problem after an EVAP system leak has been ruled out. 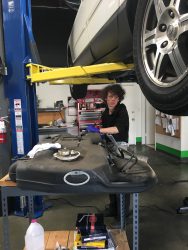 As OBD II diagnostics and EVAP emissions control strategies become more complex and sophisticated, EVAP diagnostics and repairs are a frequent challenge faced by technicians in the field.

A technician should observe the basics, do his homework, and understand how to use the tools at his disposal.

If you’re in Huntington Beach, Fountain Valley, Long Beach, or the surrounding areas and your vehicle has failed a smog inspection because of an EVAP related problem, you can roll the dice with one of those other guys and hope they know the difference between P0442 and a P0443, or you could call the ASE certified professionals at Just Smogs® in Huntington Beach and have your car diagnosed by a team that has the knowledge, training, and skill to do more than just throw parts at a problem.