Honey bee swarming season is right around the corner.  In some areas it has already begun. 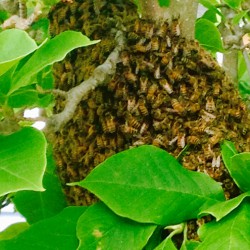 Last year, this swarm suddenly appeared in the Bohemian Orchid tree in my front yard. They were gone in 48 hours.

While impressive, and maybe a little frightening (Okay maybe very frightening), bee swarms are usually harmless if left unmolested; however with the increased presence of Africanised honey bee colonies in Southern California, you should always keep a safe distance between yourself and any bee swarm you encounter.

Why do honey bees swarm?

The simple answer is often overpopulation.  When a hive reaches capacity, a new queen is formed and she, along with a few thousand worker bees will pick a nice day to leave home and start their search for a new place to build a hive.

Along the way, the swarm will usually chose a safe place to rest for a couple of days.

While the hive rests, scouts search for a permanent hive location. In the meantime, the queen emits powerful pheromones that cause the worker bees to swarm around her in a protective ball.

Within a day or two the swarm will usually depart as quickly as it arrived.

What if it is not a rest stop? 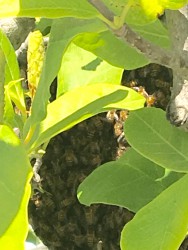 This year, a smaller swarm appeared on the same branch, in the same tree. They were also gone within 48 hours.

Bees resting in the branches of a tree, side of a house, or other exposed location will typically move on within seventy-two hours.

On the other hand, bees that move into the walls of a house, hollow of a tree, or other protected location are probably there to stay.

It’s time to call a professional!

You should NEVER attempt to evict a bee swarm by spraying it with water, smoke, chemical spray, or any other means. Instead, contact an experienced beekeeper.

You can find lists of skilled beekeepers who can handle swarm removal on the Orange County and Los Angeles County Beekeepers Association websites.

Of course, if your vehicle needs a smog inspection (STAR Station, “Regular Smog”, etc), don’t call a beekeeper, instead call Just Smogs in Huntington Beach at (714) 596-1019.  You can also book an appointment online by clicking here.